A while back I discovered the piecaken idea and knew that it was destined for my husband, an adventurous spirit and dessert connoisseur.  For those of you unfamiliar with the idea, it's been described as the TurDuckEn of desserts, a pie within a cake.

I am not a very big pie fan, and frankly- a lot of the piecaken combinations sounded fairly disgusting to me.  Peach pie in chocolate cake, I don't think so.  But, since August is birthday month for me and my husband, I decided now was as good a time as any to try my hand at making this intriguing treat.

While I considered trying a chocolaty confection, my research warned that chocolate cakes and fruit filled pies could be overly sweet combinations.  Ultimately, I decided on a blueberry pie in yellow cake with cream cheese frosting. 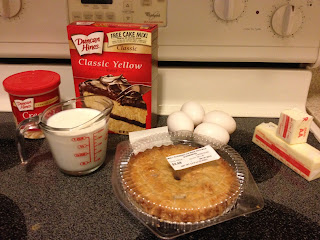 Now ladies and gentlemen, I think piecaken is a daunting task of its own right, so I opted not to complicate that by making my own pie and cake batter from scratch. So yes, this is one of those "mostly homemade" things.

I substituted milk for water and butter for oil (twice the amount of REAL butter than the box mix directions required-about 10tbs), then added an extra egg.  Pinterest told me this would make a richer cake that tastes more like bakery cakes.  It was correct. 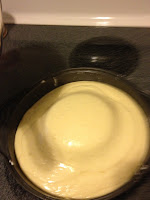 After greasing my deepest round pan and lightly flowering, I poured a layer of cake batter down, about 1/2 to 1 inch. {I would get a deeper pan and make a thicker layer for the future}

Next, free the pie from the pie tin/packaging.  Flip it over {another benefit to having a storebought pie} and place the pie in the center of the pan, top down on the layer of cake batter.

Pour more cake batter on top of the pie and around the sides until tin is about 3/4 full.  {you will have left over batter}. 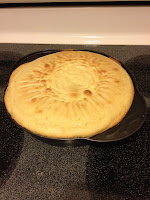 Follow baking directions as indicated on the back of the cake mix.

For my oven, I had to go a little longer than "normal" because this minor catastrophe occurred:

This is what the cake looked like at the shorter end of the estimated cooking time. 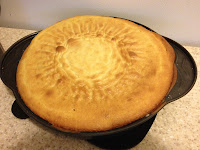 Then with a few more minutes to the longer end of the estimated cooking time it was a little more brown and the toothpick test seemed to be working.

I was anxious not to burn the cake or overcook the pie within, but I should've known I was in trouble looking at the lighter color at the center of the cake. 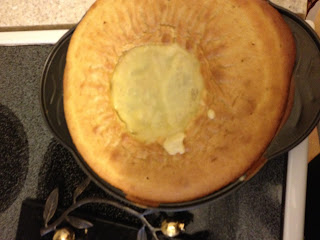 To my horror, when I tried to flip the piecaken onto a serving dish to finish cooling/prepare for icing, >>SPLAT!<< went the top portion that covered the bottom of the pie.

Not knowing what else to do, I scooped it back into position and stuck it on the top rack of the oven for another couple of minutes until it seemed to solidify.

By the end the cake was pretty brown around the edges and I was afraid I'd burned it, but I forged ahead. 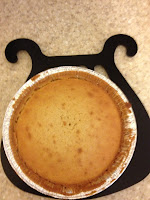 Luckily, being thrifty I didn't want to waste the cute pie tin that came with the cake and I had greased it up and baked a small 6" cake for back up in case the piecake was a failure.

After letting the piecaken cool to the point that I could handle the pan, I flipped it upside down onto a serving tray. {Thanks wedding guests!}  Then I freed the mini cake and put a layer of icing on the widest end (top) and flipped it upside down on top of the center of the piecaken.  Then I iced the rest of it using most of the can of frosting.

For all my artistic talents, I have certainly come to realize that frosting and cake decorations are not my medium.  I declined to take a picture of the finished product because it looked like a dilapidated spaceship.

Thankfully, looks can be deceiving.  Though not the most beautiful cake, it was definitely delicious and something worth trying again... but with more people around so that the incredibly tempting leftovers are less abundant.


Ultimately, I think it was a job well done.  Mission low-key, first wedded birthday was a success, if it took a little reigning myself in.  I'm thankful to have a husband that appreciates, of all things, the little services rendered.  I think it was as much a present to clean the house and make a cake as it was to give him gifts.

But of course I didn't stop there...

e(dot)e
I might have been raised by Yankees, but they were smart enough to do it in the South. My heart will forever belong south of the Mason-Dixon and East of the Mississippi. I'm on a faith journey and an art journey and here's where you can follow along.

Please and Thank You

I work really hard on this artwork...please don't steal it, link it.
If you enjoyed what you read or saw...please feel free to tell your friends.
I enjoy your feedback...please leave a comment if you feel so inclined.
Thanks y'all!